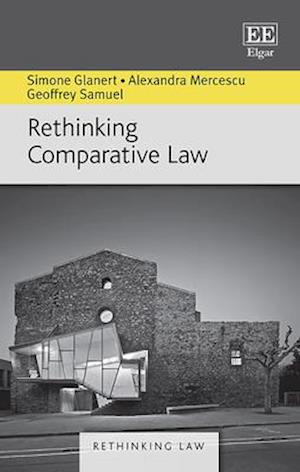 As law's institutional configurations stand, comparative law is a relatively new discipline. The first specialized journals and chairs, for example, go back a mere two hundred years or so. Yet, in its two centuries of institutional existence, comparative law has been the focus of much discussion, mostly by comparatists themselves reflecting on their practice. Indeed, some of this thinking came firmly to establish itself as a governing epistemology within the field.This book holds that the time has nonetheless come, even for such a young venture as comparative law, to engage in a re-thinking of its intellectual ways. Specifically, three comparatists hailing from different horizons investigate various assumptions and lines of reasoning that must invite reconsideration. The principal ambition informing the work is to optimize the interpretive rewards that the comparison of laws is in a position to generate.Not limited to a particular country or jurisdiction, Rethinking Comparative Law aims to attract a large audience comprising students and scholars from diverse cultural backgrounds. Undergraduate or postgraduate law students and lawyers with an interest in comparative law will find the book helpful for a better appreciation of the many implications arising from the increased interaction with foreign law in a globalizing world.