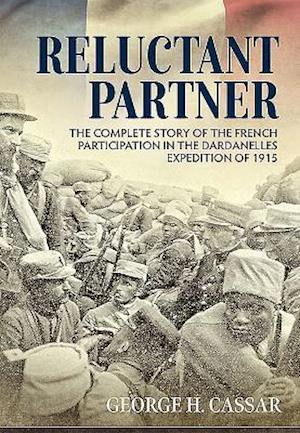 No campaign in the Great War has been the subject of such intense and prolonged attention and controversy as the one in the Dardanelles. The general perception is that it was an operation involving troops from Britain and the Empire. The role of the French is barely mentioned if at all. As junior partners the French contribution does not compare to that of the British, but it was nevertheless significant. Over the course of the ten-month operation, the French government sent to the Dardanelles six pre-dreadnought battleships, four cruisers, and a host of auxiliary vessels that included minesweepers and submarines. Additionally, it supplied a total of 79,000 troops, supported by artillery and high explosive shells. The purpose of this study is to concentrate on the activity of the French so as give a more rounded picture of the story. The main factor influencing the French decision to join the British-led expedition to the Dardanelles was to protect their interest in the Near East. France's economic and cultural ties in the Ottoman Empire were deep and of long standing, and it wanted to ensure that the British did not establish themselves in an area it coveted. Assuming that victory was a forgone conclusion, the Allies focused their early attention on the future dismemberment of Turkey rather than on attending to the needs of the campaign itself. It was a lesson for which they would pay dearly. The French were involved in the major naval attack on 18 March 1915 during which they engaged the Turkish forts at close range and, in the process, the battleship Bouvet ran into an undetected minefield and sank with the loss of over 600 of its crew. The failure of the Allied ships to force a passage through the straits prompted the British to send in the army to seize control of the Gallipoli Peninsula. In the first landing on 25 April, British and Australian forces managed to secure the beaches but were unable to advance far inland. By contrast the French contingent's feint at Kum Cale achieved its purpose, as it was intended to delay Turkish Asiatic troops from crossing the waterway to reinforce their comrades on the peninsula during the early clash of battle. Thereafter French forces were transferred to Cape Helles and placed at the eastern end of the British line, where their efforts in the three battles of Krithia were thwarted by the terrible configuration of the ground, compounded by flanking fire from the enemy batteries in Asia. In all the military action, the number of French killed, wounded or missing in action was placed at 27,000, disproportionately higher than the British (70,000). The French were content to play second fiddle until August when, frustrated at the lack of progress on the western front, they decided to augment their forces in the Dardanelles where they would play a commanding role and spearhead the next offensive. The government's objective touched off a sharp struggle with General Joffre who objected to the withdrawal of major forces from his front. At length the government found the courage to overrule Joffre, but just as the troops were ready to leave for the Dardanelles, the Central Powers attacked Serbia. Almost overnight, the French cabinet reversed its decision and instead proposed to transfer its troops to the Balkans to assist Serbia, without consulting London. The French did not have enough troops to complete the mission and consequently tried to browbeat the British to follow suit. The British already had their hands full with commitments elsewhere and were adamantly opposed to becoming involved in another operation, especially one which they judged was doomed to fail. They held out for weeks but ultimately gave way to avoid straining, or even possibly fracturing, the Alliance. Lacking the resources to sustain two fronts in the east, the British were compelled to evacuate the Gallipoli Peninsula which remarkably was carried out without the loss of a single man.

Forfattere
Bibliotekernes beskrivelse No campaign in the Great War has been the subject of such intense and prolonged attention and controversy as the one in the Dardanelles. The purpose of this study is to concentrate on the activity of the French so as give a more rounded picture of the story. 24 b/w photos, 10 b/w maps