Reimagining War in the 21st Century

- From Clausewitz to Network-Centric Warfare 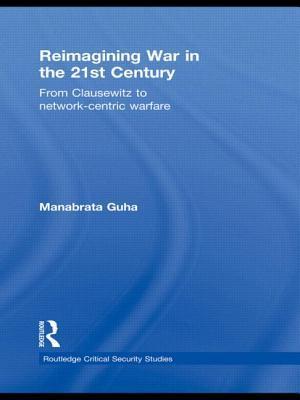 This book interrogates the philosophical backdrop of Clausewitzian notions of war, and asks whether modern, network-centric militaries can still be said to serve the 'political'. In light of the emerging theories and doctrines of Network-Centric War (NCW), this book traces the philosophical backdrop against which the more common theorizations of war and its conduct take place. Tracing the historical and philosophical roots of modern war from the 17th Century through to the present day, this book reveals that far from paralyzing the project of re-problematisating war, the emergence of NCW affords us an opportunity to rethink war in new and philosophically challenging ways.This book will be of much interest to students of critical security studies, social theory, war studies and political theory/IR.Manabrata Guha is Assistant Professor (ISSSP) at the National Institute of Advanced Studies, Bangalore, India.