Red Rag To A Bull

- Rural Life in an Urban Age 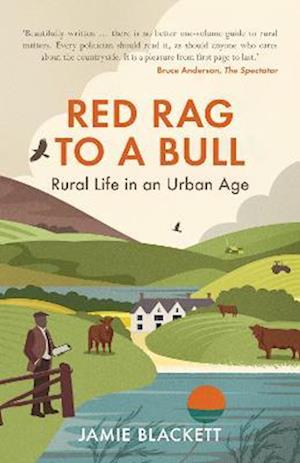 Author Jamie Blackett arrives home from the Army to take over a small family estate on the Solway Firth in Dumfries and Galloway and finds a rapidly changing countryside.In a humorous and occasionally-moving tale, he describes how he grapples with the intricacies of farming, conservation and estate management and tells the story of founding a pack of foxhounds and a herd of pedigree beef cattle. Part childhood memoir, part biopic of rural life, readers are transported to a remote and beautiful part of Scotland and acquainted with its wildlife, its people and its customs. One minute he is unblocking his septic tank, and the next he is watching Glenn Close film a sex scene in his bedroom.Set over the first two decades of the 21st century, through the Scottish independence referendum, Brexit and the hunting ban, the result is an enlightened review of the challenges threatening a vulnerable way of life and an emerging rural philosophy about the directions Scotland, farming and the countryside might take in the brave new world of Brexit.