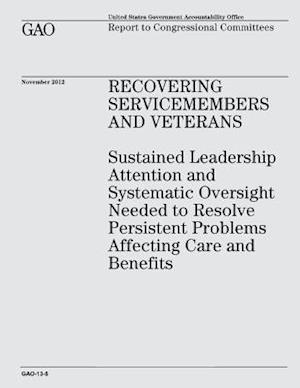 Deficiencies exposed at Walter Reed Army Medical Center in 2007 served as a catalyst compelling the Departments of Defense (DOD) and Veterans Affairs (VA) to address a host of problems for wounded, ill, and injured servicemembers and veterans as they navigate through the recovery care continuum. This continuum extends from acute medical treatment and stabilization, through rehabilitation to reintegration, either back to active duty or to the civilian community as a veteran. In spite of 5 years of departmental efforts, recovering servicemembers and veterans are still facing problems with this process and may not be getting the services they need. Key departmental efforts included the creation or modification of various care coordination and case management programs, including the military services' wounded warrior programs. However, these programs are not always accessible to those who need them due to the inconsistent methods, such as referrals, used to identify potentially eligible servicemembers, as well as inconsistent eligibility criteria across the military services' wounded warrior programs. The departments also jointly established an integrated disability evaluation system to expedite the delivery of benefits to servicemembers. However, processing times for disability determinations under the new system have increased since 2007, resulting in lengthy wait times that limit servicemembers' ability to plan for their future. Finally, despite years of incremental efforts, DOD and VA have yet to develop sufficient capabilities for electronically sharing complete health records, which potentially delays servicemembers' receipt of coordinated care and benefits as they transition from DOD's to VA's health care system. Collectively, a lack of leadership, oversight, resources, and collaboration has contributed to the departments' inability to fully resolve problems facing recovering servicemembers and veterans. Initially, departmental leadership exhibited focus and commitment to addressing problems related to case management and care coordination, disability evaluation systems, and data sharing between DOD and VA. However, the committee's oversight waned over time, and in January 2012, it was merged with the VA/DOD Joint Executive Council. Whether this council can effectively address the shorter-term policy focused issues once managed by the Senior Oversight Committee remains to be seen. Furthermore, DOD does not provide central oversight of the military services' wounded warrior programs, preventing it from determining how well these programs are working across the department. However, despite these shortcomings, the departments continue to take steps to resolve identified problems, such as increasing the number of staff involved with the electronic sharing of health records and the integrated disability evaluation process. While the departments' previous attempts to collaborate on how to resolve case management and care coordination problems have largely been unsuccessful, a joint task force established in May 2012 is focused on resolving long-standing areas of disagreement between VA, DOD, and the military services. However, without more robust oversight and military service compliance, consistent implementation of policies that result in more effective case management and care coordination programs may be unattainable. The National Defense Authorization Act for Fiscal Year 2008 required DOD and VA to jointly develop and implement policy on the care, management, and transition of recovering servicemembers. It also required GAO to report on DOD's and VA's progress in addressing these requirements. This report specifically examines (1) the extent to which DOD and VA have resolved persistent problems facing recovering servicemembers and veterans as they navigate the recovery care continuum, and (2) the reasons DOD and VA leadership have not been able to fully resolve any remaining problems.