- The Horserace of the Century and the Redemption of a Sport

indgår i serie Horses in History 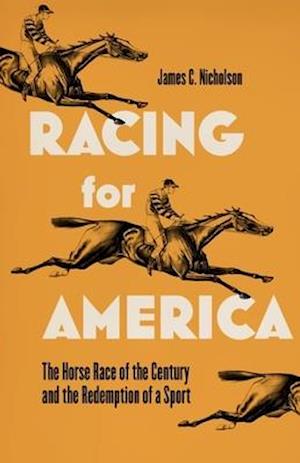 On October 20, 1923, at Belmont Park in New York, Kentucky Derby champion Zev toed the starting line alongside Epsom Derby winner Papyrus, the top colt from England, to compete for a $100,000 purse. Years of Progressive reform efforts had nearly eliminated horseracing in the United States only a decade earlier. But for weeks leading up to the match race that would be officially dubbed the "International," American journalists provided unprecedented exposure for the sport. The widespread buzz surrounding the race helped lay groundwork for the sport's national proliferation in the years that followed and reaffirmed New York's status as the epicenter of American racing a decade after the sport's return from a two-year shutdown there. Framing the match race between two prominent countries also raised the stakes and put Americans in the position of embracing a new nation, one that would become a global superpower following World War I. In Racing for America, author James C. Nicholson argues that the Zev-Papyrus match served as an important starting point for a progression of international events, including the Empire City Gold Cup, the Washington DC International Stakes, and the Arlington Million, that eventually culminated in the creation of the Breeders Cup World Championships - the annual apex of American racing. Nicholson discusses how syndicated sports columnists shared news, analysis, gossip, and profiles of the equine contestants and the people associated with them, including Zev's owner, oil tycoon Harry F. Sinclair, curmudgeonly trainer Sam Hildreth, and budding celebrity jockey Earl Sande. The American press also played up the rags-to-riches angle in stories about Papyrus's team, creating interest in, and sympathy for, the English team. Those tales of upward social mobility also homed in on American mythological space, muddying the waters as to which horse better reflected what Americans collectively wanted to see in themselves. An American Triumph narrates the rise of an international racing circuit and community, the imperiled status of American racing, the rise of big-time celebrity culture surrounding sports, the glamor and corruption of American politics and resurgent big business, and the popularization of eugenics. Though the International Race was one of the biggest sporting events of the era, no one associated with Zev or the "Race of the Century" would earn a lasting place in American popular memory among other athletic heroes in the golden age of sports, including Babe Ruth, Jack Dempsey, Bill Tilden, and Walter Hagen. Racing for America remembers the blockbuster event, arguing not only that the match brought American horseracing to a place of cultural prominence that it had not achieved in decades, but that the "International," illustrates Americans' hunger for tangible evidence of their nation's strength in the aftermath of the First World War, as well as the central role of politics, money, and ballyhoo in the growth of commercialized sports in Jazz Age America.