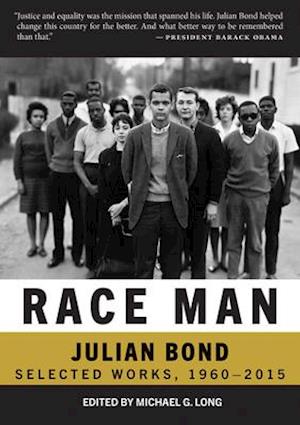 An inspiring, historic collection of writings from one of America's most important civil rights leaders.

"Justice and equality was the mission that spanned his life. Julian Bond helped change this country for the better. And what better way to be remembered than that."--President Barack Obama

No one in the United States did more to advance the legacy of Martin Luther King Jr. than Julian Bond. Race Man--a collection of his speeches, articles, interviews, and letters--constitutes an unrivaled history of the life and times of one of America's most trusted freedom fighters, offering unfiltered access to his prophetic voice on a wide variety of social issues, including police brutality, abortion, and same-sex marriage. A man who broke race barriers and set precedents throughout his life in politics; co-founder of the Southern Poverty Law Center and long-time chair of the NAACP; Julian Bond was a leader and a visionary who built bridges between the black civil rights movement and other freedom movements--especially for LGBTQ and women's rights. As we enter the third decade of the twenty-first century, there is no better time to return to Bond's works and words, many of them published here for the first time.

"Julian Bond's Race Man anthology offers a uniquely perceptive and cogent overview of the African-American freedom struggle during its heyday in the 1960s and the perilous decades that have followed."--Clayborne Carson, Director, The Martin Luther King Jr Research and Education Institute, Stanford University