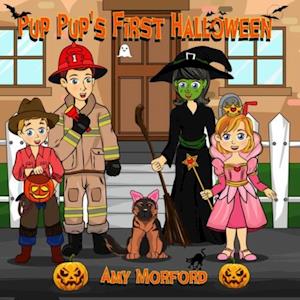 Dogs are viewed as members of the family so we sometimes forget that they are different. Events and experiences that are fun and exciting to humans can seem a little spooky to dogs--especially on Halloween! Pup Pup's First Halloween is the story of an adopted puppy's first Halloween experience with his beloved adopted family. Readers of the original Pup Pup book are already familiar with the story of Pup Pup's adoption, but it's not necessary to have read the first book to enjoy this amusing Halloween tale! Everyone knows that Halloween is a fun night for humans and 'children' of all ages to dress up in their favorite fantasy outfit. But to a newly adopted dog like Pup Pup, Halloween can be downright scary. Will Pup Pup survive his first Halloween night? Will he ever see his beloved family members again? Pup's Pup's First Halloween is filled with scary drama, but it's also an educational lesson about the way that dogs view the 'normal' holiday rituals that humans take for granted. Pup Pup's First Halloween is a fun-filled holiday treat that's full of empathy and sympathy for Pup Pup. Best of all, there's a warm and fuzzy ending!