- Poverty, Family, and Kinship in a Heartland Community 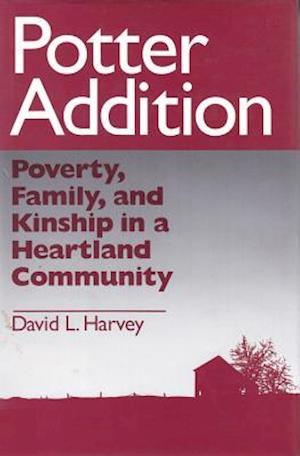 With a few notable exceptions, studies of poor, native-born, non-ethnic whites are rare in the sociological literature. This book attempts to correct the oversight by presenting ethnography of an actual small, poor, white, heartland community that the author calls "Potter Addition." The community consists of some 100 families, and is located on the rural-urban fringe of a medium-sized Midwestern city.Poverty, Family, and Kinship in a Heartland Community is the story of three generations of rural families who, one after another, have been driven from the land during the last seventy-five years. Harvey argues (against the grain of a number of recent studies) that "Potter Addition's" poverty, like much of modern poverty, has its origins in the productive contradictions of late capitalism, and thus is not the result of some moral or motivational defect of the poor themselves. At the same time he argues that the families he studies-even as they struggle to survive their uncertain niche and learn how to adapt-play an active role in reproducing the everyday material and cultural details of their poverty from the substance of their daily experiences.Working from this premise, Harvey's work provides a detailed ethnographic description of "Potter Addition" and its people. The volume focuses especially on the family and kinship structures that have developed in "Potter Addition," and shows the logic and rationality of.such arrangements by revealing how they fit into the-overall response of thepoor to their uncertain and unpredictable class situation. This is a unique effort by an outstanding researcher.