- The Definitive History of the Road & Competition Cars 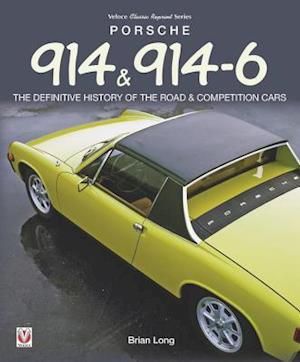 Launched in 1969, the 914 series went through many problems and changes before production came to an end in 1976. It was constantly improved during its short life, but time just ran out for the model. It is interesting to note that until the Boxster made its debut, it remained Porsche's only mid-engined production car, although the company's racing models had been built with this layout for some years. The 914 also had a fine competition history - something that is often overlooked or run down because it wasn't as brilliant as that of the 911. By normal standards, however, it was indeed a fine history. There were also a large number of specials built on the 914 chassis, and both of these aspects have been covered in detail. The 914 series has often been cited as the forgotten Porsche, but there is a growing band of enthusiasts who only have eyes for this model. The handling is of course a major factor contributing towards the enjoyment of the type, but many people like the styling, and the fact that for so many years this was the most affordable of all Porsches to own and run.Now times have changed and the model has appreciated, not only in value, but in terms of awareness as well. The 914-6 has become particularly desirable, and it is hoped that this book will go some way towards explaining the 914's various merits.