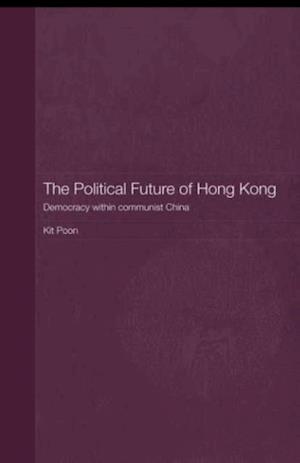 On July 1st, 2007, Hong Kong celebrated the 10th anniversary of its return to the People's Republic of China, but the past decade has been a bumpy ride for both the Hong Kong people and the central leaders in China. In fact, in 2003 Beijing had already succumbed to public pressure within the fairly short period of its rule by abruptly replacing its handpicked first Chief Executive with a British-groomed civil servant. This book examines the origin and evolution of Hong Kong's political system, analyses the current contradictions in the system, and discusses how the system might develop in future. It focuses in particular on the office of Chief Executive in the context of Hong Kong's transformation from a British colony to a Special Administrative Region in China. The dualistic structure of the Chief Executive's office embodies a dilemma between two competing imperatives - Communist China's imperative to retain a colonial political system where executive power is concentrated at the top; alongside the need to accommodate new, increasing demands for democratic representation within the territory. The Political Future of Hong Kong demonstrates how the British legacy left its imprint on Hong Kong's political system. It analyses the strategies adopted by the Sovereign state as it attempted to cope with demands for representative government in the post-handover years, and the strains placed on Hong Kong's political institutions by the uneasy relationship between central government and local forces of liberal autonomy. Kit Poon examines the possibility of the introduction of universal suffrage for the selection of the Chief Executive, and considers how Hong Kong can secure a democratic future in the context of broader Beijing-Hong Kong relations.