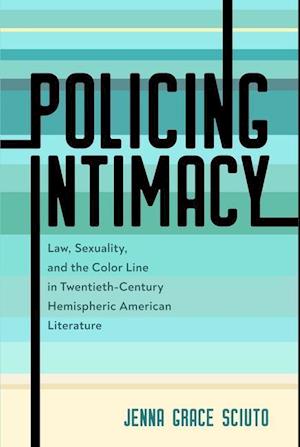 In Policing Intimacy: Law, Sexuality, and the Color Line in Twentieth-Century Hemispheric American Literature, author Jenna Grace Sciuto analyzes literary depictions of sexual policing of the color line across multiple spaces with diverse colonial histories: Mississippi through William Faulkner's work, Louisiana through Ernest Gaines's novels, Haiti through the work of Marie Chauvet and Edwidge Danticat, and the Dominican Republic through writing by Julia Alvarez, Junot D az, and Nelly Rosario. This literature exposes the continuing coloniality that links depictions of US democracy with Caribbean dictatorships in the twentieth century, revealing a set of interrelated features characterizing the transformation of colonial forms of racial and sexual control into neocolonial reconfigurations. A result of systemic inequality and large-scale historical events, the patterns explored herein reveal the ways in which private relations can reflect national occurrences and the intimate can be brought under public scrutiny. Acknowledging the widespread effects of racial and sexual policing that persist in current legal, economic, and political infrastructures across the circum-Caribbean can in turn bring to light permutations of resistance to the violent discriminations of the status quo. By drawing on colonial documents, such as early law systems like the 1685 French Code Noir instated in Haiti, the 1724 Code Noir in Louisiana, and the 1865 Black Code in Mississippi, in tandem with examples from twentieth-century literature, Policing Intimacy humanizes the effects of legal histories and leaves space for local particularities. By focusing on literary texts and variances in form and aesthetics, Sciuto demonstrates the necessity of incorporating multiple stories, histories, and traumas into accounts of the past.