- Art and Empire in the Natural History 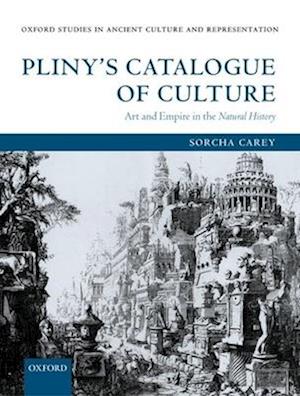 One of the earliest surviving examples of 'art history', Pliny the Elder's 'chapters on art' form part of his encyclopaedic Natural History, completed shortly before its author died during the eruption of Vesuvius in AD 79. This important new work argues that the Natural History offers a sophisticated account of the world as empire, in which art as much as geography can be used to expound a Roman imperial agenda. Reuniting the 'chapters on art'with the rest of the Natural History, Sorcha Carey considers how the medium of the 'encyclopaedia' affects Pliny's presentation of art, and reveals how art is used to explore themes important to the work as a whole. Throughout, the author demonstrates that Pliny's 'chapters on art' are a profoundly Roman creation,offering an important insight into responses to art and culture under the early Roman empire.

Forfattere
Bibliotekernes beskrivelse One of the earliest surviving examples of 'art history', Pliny the Elder's 'chapters on art' form part of his encyclopaedic Natural History. This important study reassesses Pliny's discussion of art, revealing how art is used to expound the Roman imperial agenda which dominates the work as a whole. 4 pp colour plates, numerous halftones and line drawings