- The Civil War and Reconstruction in Piney Woods Georgia 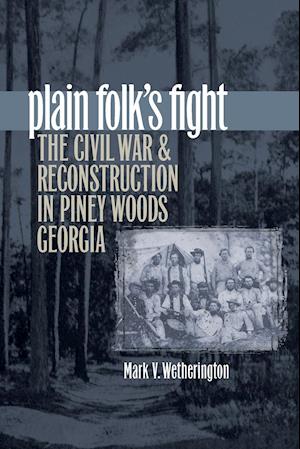 In an examination of the effects of the Civil War on the rural Southern home front, Mark V. Wetherington looks closely at the experiences of white "plain folk--mostly yeoman farmers and craftspeople--in the wiregrass region of southern Georgia before, during, and after the war. Although previous scholars have argued that common people in the South fought the battles of the region's elites, Wetherington contends that the plain folk in this Georgia region fought for their own self-interest.

Plain folk, whose communities were outside areas in which slaves were the majority of the population, feared black emancipation would allow former slaves to move from cotton plantations to subsistence areas like their piney woods communities. Thus, they favored secession, defended their way of life by fighting in the Confederate army, and kept the antebellum patriarchy intact in their home communities. Unable by late 1864 to sustain a two-front war in Virginia and at home, surviving veterans took their fight to the local political arena, where they used paramilitary tactics and ritual violence to defeat freedpeople and their white Republican allies, preserving a white patriarchy that relied on ex-Confederate officers for a new generation of leadership.