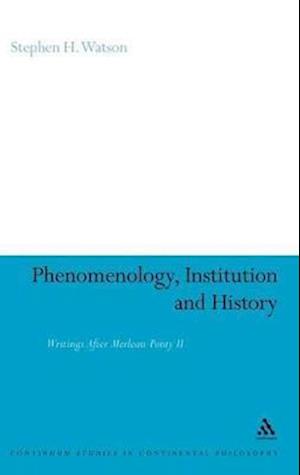 This is a new monograph examining Merleau-Ponty's phenomenology and its implications for historical rationality and the community. Maurice Merleau-Ponty is widely known for his emphasis on embodied perceptual experience. This emphasis initially relied heavily on the positive results of Gestalt psychology in addressing issues in philosophical psychology and philosophy of mind from a phenomenological standpoint. However, far less work has been done in addressing his evolving conception of how such an account influenced more general philosophical issues in epistemology, accounts of rationality, or its status of theoretical discourse. Developing the work he has already done in "In the Shadow of Phenomenology" to address this gap in the literature, Stephen H. Watson further examines the responses to Merleau-Ponty's contributions to these issues. This book emphasises the historical and intersubjective underpinnings of Merleau-Ponty's late accounts, in relation to rationality, institution and community, and examines its implications.