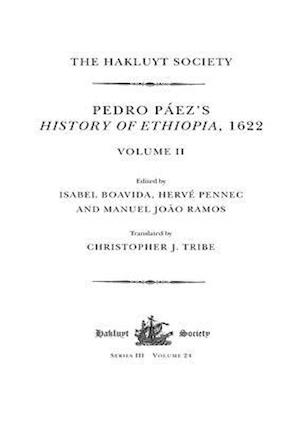 This book, in two volumes, contains an annotated English translation of the Historia da Ethiopia by the Spanish Jesuit missionary priest Pedro Paez (Pero Pais in Portuguese), 1564-1622, who worked in the Portuguese padroado missions, first in India and then in Ethiopia, long thought to be the kingdom of the legendary Prester John. His history of Ethiopia was written in Portuguese in the last ten years of his life and survives in only two manuscripts. The translation, by Christopher J. Tribe, is based on the new critical edition of the Portuguese text by Isabel Boavida, Herve Pennec and Manuel Joao Ramos, which was published in Lisbon in 2008. They are also the editors of this English version. The History of Ethiopia is an essential source for several areas of study - from the history of the Catholic missions in that country and the relations between the European religious orders, to the history of art and religions; from the history of geographical exploration to the ideological contextualization of the Ethiopian kingdom; from material culture to Abyssinian political and territorial administration; and from an analysis of local circumstances to changes in human ecology in the Horn of Africa and the Indian Ocean. It is a repository of empirical knowledge on the political geography, religion, customs, flora and fauna of Ethiopia. It combines travel narrative with a historico-ethnographic monograph, and is a chronicle of the activities of Jesuit missionaries in their Ethiopian mission. It also reworks a wide variety of documents, including the first translations into a European language of a number of Ethiopian literary texts, from royal chronicles to hagiographies. It complements other early accounts of Ethiopia by Ludovico de Varthema, Francisco Alvares, Castanhoso, Bermudez, Arnold von Harff, Manoel de Almeida, Bahrey, Alessandro Zorzi, Jeronimo Lobo and Vaclav Prutky, all published by The Hakluyt Society.