From Adler to Zulawski

- A Century of Polish Artists in Britain 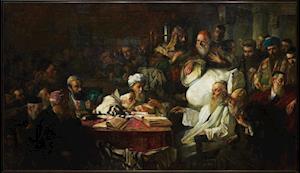 A new survey of the contribution of Polish-born artists to British visual culture based on Ben Uri's 2017 exhibition of the same title. The publication celebrates Poland as the homeland of the second largest migrant group in Britain, with over one million citizens (and with Polish as the most widely spoken second language), and its recent centenary in 2018 as an independent nation state. It narrates the story of the Polish community in Britain and Poland's recent turbulent history through the lens of art, tracing the complex stories of Polish-born artists - both Jews and non-Jews - who fled successive occupations, were variously persecuted, imprisoned and interned, crossed continents - or, today, have made positive choices to come to Britain to study or develop professionally. It brings together a century of artworks and archival material by both celebrated and lesser-known Polish-born artists from the Ben Uri Collection and from Polish institutions and private collectors in Britian. Paintings, posters, prints, drawings, cartoons, book illustrations, film and sculpture explore issues of identity and migration, whilst intersecting with formal art historical developments across the 20th century, ranging from expressionism to Pop Art. Text in English with essays also in Polish.