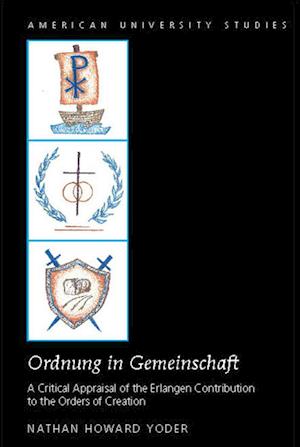 The Lutheran doctrine of the orders of creation specifies fundamental forms of human community. Grounded in God's structuring of the universe, these institutions acquire their expression in human history. Although they are fallen and distorted under sin, they remain God's good creation. Illumined by the witness of Scripture, their ontology exists independently of ideological conceit.The tradition is a specifically Lutheran consideration of natural law theory and plays an important role in two-kingdoms theology and the law/gospel dialectic. Historically, the doctrine has suffered significant abuse, specifically with the extra-scriptural elevation of Volk and race as inviolable institutions in support of Nazi ideology. Consequently, many have dismissed the doctrine as a static worldview that disallows critique of the status quo. In its orthodox biblical formulation, however, the doctrine remains a powerful safeguard against what Walter Kunneth calls "the ideological alienation of the gospel" that invokes the name of Christ to justify sinful desire.Nathan Howard Yoder evaluates the variant orders of creation models of the Erlangen theologians of the nineteenth and twentieth centuries. Concentrating specifically on the work of Paul Althaus, Werner Elert, and Walter Kunneth, he lifts up Kunneth's christological/trinitarian focus and appeal to sola scriptura as essential correctives to the tradition. He makes the case that the doctrine remains imperative to moral theology, specifically in the Church's efforts against the rampant antinomianism of the postmodern era.This book will serve well as a reference for graduate and post-graduate level courses in systematic theology, Christian ethics/moral theology, and the Lutheran Confessions.