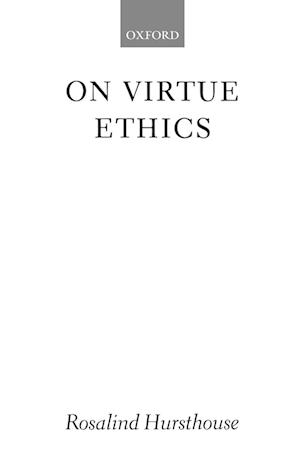 Virtue ethics is perhaps the most important development within late twentieth-century moral philosophy. Rosalind Hursthouse, who has made notable contributions to this development, now presents a full exposition and defence of her neo-Aristotelian version of virtue ethics. She shows how virtue ethics can provide guidance for action, illuminate moral dilemmas, and bring out the moral significance of the emotions. Deliberately avoiding a combative stance, she findsless disagreement between Kantian and neo-Aristotelian approaches than is usual, and she offers the first account from a virtue ethics perspective of acting 'from a sense of duty'. She considers the question which character traits are virtues, and explores how answers to this question can be justifiedby appeal to facts about human nature. Written in a clear, engaging style which makes it accessible to non-specialists, On Virtue Ethics will appeal to anyone with an interest in moral philosophy.

Forfattere
Bibliotekernes beskrivelse Presents an exposition and defence of author's own version of virtue ethics. This book discusses a range of philosophical topics, including action, duty, dilemmas, moral absolutism, and the moral significance of the emotions.