indgår i serie From Reason to Revolution 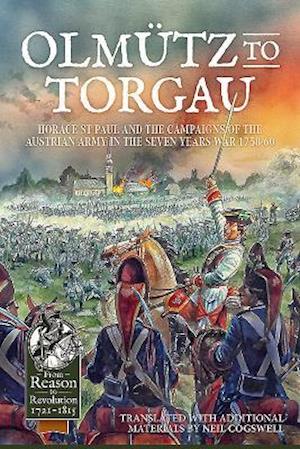 Following the disastrous conclusion to the campaign of 1757, the Austrian Army regrouped in Bohemia. Meanwhile, the King of Prussia sought to complete his reconquest of Silesia before seizing the initiative and thrusting directly towards Vienna. In his path stood the town of Olmutz, which would prove to be a high-tide mark of the war. Over the next three years, Austria and her allies inflicted a series of heavy defeats on the Prussians at Hochkirch, Kunersdorf, Dresden, Maxen, Landeshut and Glatz. By the end of 1760 - with Berlin open to insult by Swedish, Austrian and especially Russian raiders - the King of Prussia was left with no other option than the desperate measure of attacking the Austrian Army in a renowned, strong defensive position on the heights of Suptitz (outside Torgau). From the near-balletic formality of the battles and sieges of a prior age, the business of war changed during these campaigns. Many of the actions were designed with the objective of annihilation, and the critical moment of several battles came at night; the geometric precision of siege warfare gave way to the indiscriminate horrors of bombardment.Throughout these campaigns, Horace St Paul - an English gentleman volunteer - continued to accompany Marshal Daun. He noted the day-to-day progress of the army and recorded the essential connective tissue which links the great events of these campaigns - often highlighting occasions where a general action was expected, but does not occur. In parallel, this volume includes accounts from the Prussian perspective - including that of Henri de Catt, to whom the King of Prussia confided his thoughts.The text is accompanied by 242 plates of maps and statistical information, as well as a detailed gazetteer and lists of persons and regiments named.

Forfattere
Bibliotekernes beskrivelse An extremely detailed history of the Austrian army in the second half of the Seven Years War. 242 maps & plans, 2 ills