No Depression in Heaven

- The Great Depression, the New Deal, and the Transformation of Religion in the Delta 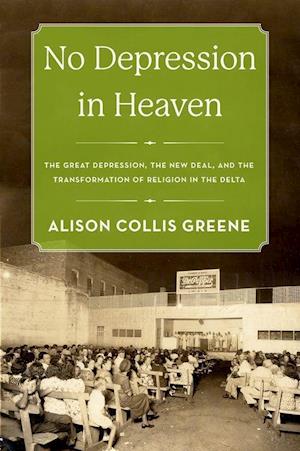 In No Depression in Heaven, Alison Collis Greene demonstrates how the Great Depression and New Deal transformed the relationship between church and state. Grounded in Memphis and the Delta, this book traces the collapse of voluntarism, the link between southern religion and the New Deal, and the gradual alienation of conservative Christianity from the state. At the start of the Great Depression, churches and voluntary societies provided the only significant source of aid for those in need in the South. Limited in scope, divided by race, and designed to control the needy as much as to support them, religious aid collapsed under the burden of need in the early 1930s. Hungry, homeless, and out-of-work Americans found that they had nowhere to turn at the most desolate moment of their lives. Religious leaders joined a chorus of pleas for federal intervention in the crisis and a permanent social safety net.They celebrated the New Deal as a religious triumph. Yet some complained that Franklin Roosevelt cut the churches out of his programs and lamented their lost moral authority. Still others found new opportunities within the New Deal. By the late 1930s, the pattern was set for decades of religious and political realignment.More than a study of religion and politics, No Depression in Heaven uncovers the stories of men and women who endured the Depression and sought in their religious worlds the spiritual resources to endure material deprivation. Its characters are rich and poor, black and white, mobile sharecroppers and wealthy reformers, enamored of the federal government and appalled by it. Woven into this story of political and social transformation are stories of southern men and women who faced thegreatest economic disaster of the twentieth century and tried to build a better world than the one they inhabited.

Forfattere
Bibliotekernes beskrivelse A study of the inability of the churches to deal with the crisis of the Great Depression and the shift from church-based aid to a federal welfare state. 20 hts