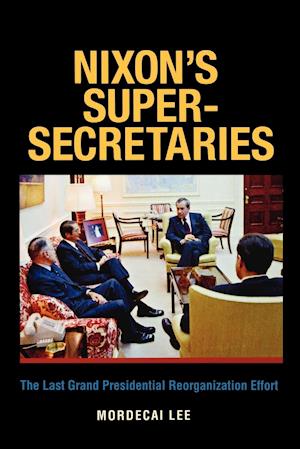 The Watergate scandal of 1973 claimed many casualties, political and otherwise. Along with many personal reputations and careers, President Richard Nixon's bold attempt to achieve a sweeping reorganization of the domestic portion of the executive branch was also pulled into the vortex.

Now, Mordecai Lee examines Nixon's reorganization, finding it notable for two reasons. First, it was sweeping in intent and scope, representing a complete overhaul in the way the president would oversee and implement his domestic agenda. Second, the president instituted the reorganization administratively--by appointment of three "super-secretaries"--without congressional approval. The latter aspect generated ire among some members of Congress, notably Sam Ervin, a previously little-known senator from North Carolina who chaired the Government Operations Committee and, soon after, the Senate's Select Committee on Presidential Campaign Activities--known to the public as "the Watergate Committee."

Asserting that Nixon's reorganization effort represents a significant event in the evolution of the managerial presidency and public administration, Nixon's Super-Secretaries presents the most comprehensive historical narrative to date concerning this reorganization attempt. The author has utilized previously untapped original and primary sources to provide unprecedented detail on the inner workings, intentions, and ultimate demise of Nixon's ambitious plan to reorganize the sprawling federal bureaucracy.