- A Kentucky Colt, the Epsom Derby, and the Rise of the Modern Thoroughbred Industry 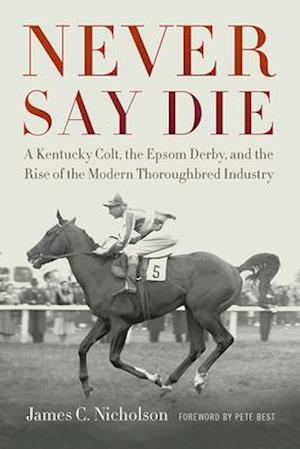 A quarter of a million people braved miserable conditions at Epsom Downs on June 2, 1954, to see the 175th running of the prestigious Derby Stakes. Queen Elizabeth II and Sir Winston Churchill were in attendance, along with thousands of Britons who were all convinced of the unfailing superiority of English bloodstock and eager to see a British colt take the victory. They were shocked when a Kentucky-born chestnut named Never Say Die galloped to a two-length triumph at odds of 33--1, winning Britain's greatest race and beginning an important shift in the world of Thoroughbred racing. Never Say Die traces the history of this extraordinary colt, beginning with his foaling in Lexington, Kentucky, when a shot of bourbon whiskey revived him and earned him his name. Author James C. Nicholson also tells the stories of the influential individuals brought together by the horse and his victory -- from the heir to the Singer sewing machine fortune to the Aga Khan. Most fascinating is the tale of Mona Best of Liverpool, England, whose well-placed bet on the long-shot Derby contender allowed her to open the Casbah Coffee Club. There, her son met musicians John Lennon, Paul McCartney, and George Harrison and later joined their band.

Featuring a foreword by the original drummer for the Beatles, Pete Best, this remarkable book reveals how an underdog's surprise victory played a part in the formation of the most successful and influential rock band in history and made the Bluegrass region of Kentucky the center of the international Thoroughbred industry.