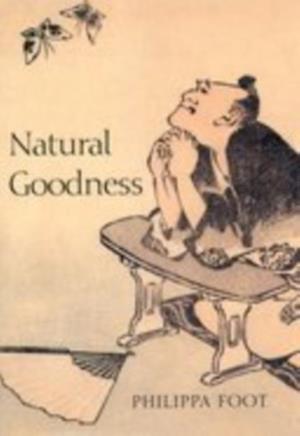 Philippa Foot has for many years been one of the most distinctive and influential thinkers in moral philosophy. Long dissatisfied with the moral theories of her contemporaries, she has gradually evolved a theory of her own that is radically opposed not only to emotivism and prescriptivism but also to the whole subjectivist, anti-naturalist movement deriving from David Hume. Dissatisfied also with both Kantian and utilitarian ethics, she claims to have isolated aspecial form of evaluation that predicates goodness and defect only to living things considered as such: she finds this form of evaluation in moral judgements. Her vivid discussion ranges over topics such as practical rationality, erring conscience, and the relation between virtue and happiness, endingwith a critique of Nietzsche's immoralism. Natural Goodness is the long-awaited exposition of a highly original approach to moral philosophy, representing a fundamental break away from the assumptions of recent debates. Foot challenges many prominent philosophical arguments and attitudes; hers is not, however, a work of dry theory, but full of life and feeling, written for anyone intrigued by the deepest questions about goodness and human life. This beautifully written book offers a new beginning for moralphilosophy.