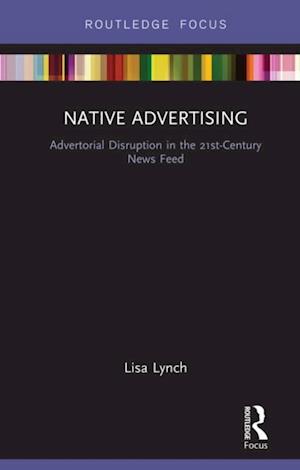 Native Advertising examines the emerging practices and norms around native advertising in US and European news organizations. Over the past five years native advertising has rapidly become a significant revenue stream for both digital news 'upstarts' and legacy newspapers and magazines.This book helps scholars and students of journalism and advertising to understand the news industry's investment in native advertising, and consider the effects this investment might have on how news is produced, consumed, and understood. It is argued that although they have deep roots in earlier forms of advertising, native ads with a political or advocacy bent have the potential to shift the relationship between news outlets and audiences in new ways, particularly in an era when trust in the media has reached a historic low point. Beyond this, such advertisements have the potential to shift how media systems function in relation to state power, by changing the relationship between commercial and non-commercial speech.Drawing on real-world examples of native ads and including an in-depth case study contributed by Ava Sirrah, Native Advertising provides an important assessment of the potential consequences of native advertising becoming an even more prominent fixture in the 21st-century news feed.