Myths of the Norsemen: From the Eddas and Sagas (Illustrated) 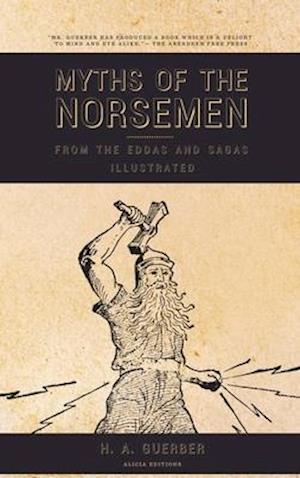 "There are many books on mythology, but we do not know any quite like the present. It gives in a convenient compass all that the ordinary student need know, and the stories are carefully classified. Mr. Guerber has produced a book which is a delight to mind and eye alike."- The Aberdeen Free Press

Highly detailed and fully illustrated, this book constitutes a veritable encyclopedia of Norse mythology, including descriptions of notable characters: Odin, Frigga, Thor, Freya, Balder, Loki... The object of this work is to familiarize readers with the myths and legends which form the principal subjects of Nordic literature, and whose influence is everywhere apparent in the subsequent history of literature and art. The author also presents the most famous sagas, such as The Sigurd Saga, The Story of Frithiof, The Twilight of the Gods.

The book includes a complete chapter on comparative mythology (Greek and Northern Mythologies). We need to know more about the Myths of the Norsemen...  here is the very book to illumine, and, by its very beauty, to imbue its readers with an appreciation of that gospel of the beautiful which these ancient myths inculcate."In fact these old Norse songs have a truth in them, an inward perennial truth and greatness. It is a greatness not of mere body and gigantic bulk, but a rude greatness of soul."(Carlyle, "Heroes and Hero Worship.")

Excerpt: Undoubtedly Northern mythology has exercised a deep influence upon our customs, laws, and language, and there has been, therefore, a great unconscious inspiration flowing from these into English literature. The most distinctive traits of this mythology are a peculiar grim humour, to be found in the religion of no other race, and a dark thread of tragedy which runs throughout the whole woof, and these characteristics, touching both extremes, are writ large over English literature.

But of conscious influence, compared with the rich draught of Hellenic inspiration, there is little to be found, and if we turn to modern art the difference is even more apparent.

This indifference may be attributed to many causes, but it was due first to the fact that the religious beliefs of our pagan ancestors were not held with any real tenacity. Hence the success of the more or less considered policy of the early Christian missionaries to confuse the heathen beliefs, and merge them in the new faith, an interesting example of which is to be seen in the transference to the Christian festival of Easter of the attributes of the pagan goddess Eástre, from whom it took even the name.