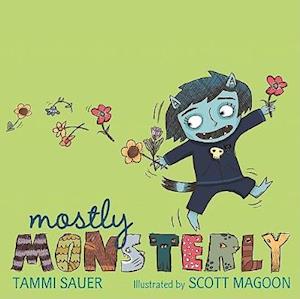 Bernadette might seem like an ordinary monster, but sometimes she likes to do some very unmonsterlike things, like pick flowers. And pet kittens. And bake. When the time comes for Bernadette to go to Monster Academy, she's just a teensy bit nervous. Her classmates just don't understand her. They'd rather uproot trees than sing friendship songs. And they prefer fried snail goo to Bernadette's homemade cupcakes with sprinkles. Can Bernadette find a way to make friends at school and still be herself?

Forfattere
Bibliotekernes beskrivelse Bernadette might seem like an ordinary monster, but sometimes she likes to do unmonsterlike things--like pick flowers and pet kittens. This sweet story follows one little monster who just wants to be herself. Full color.