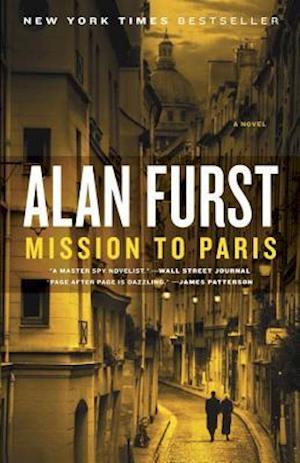 "Page after page is dazzling."--James Patterson

NEW YORK TIMES BESTSELLER Late summer, 1938. Hollywood film star Fredric Stahl is on his way to Paris to make a movie. The Nazis know he's coming--a secret bureau within the Reich has been waging political warfare against France, and for their purposes, Fredric Stahl is a perfect agent of influence. What they don't know is that Stahl, horrified by the Nazi war on Jews and intellectuals, has become part of an informal spy service run out of the American embassy. Mission to Paris is filled with heart-stopping tension, beautifully drawn scenes of romance, and extraordinarily alive characters: foreign assassins; a glamorous Russian actress-turned-spy; and the women in Stahl's life. At the center of the novel is the city of Paris--its bistros, hotels grand and anonymous, and the Parisians, living every night as though it were their last. Alan Furst brings to life both a dark time in history and the passion of the human hearts that fought to survive it. Praise for Mission to Paris "The most talented espionage novelist of our generation."--Vince Flynn "Vividly re-creates the excitement and growing gloom of the City of Light in 1938-39 . . . It doesn't get more action-packed and grippingly atmospheric than this."--The Boston Globe "One of Furst's] best . . . This is the romantic Paris to make a tourist weep. . . . In Furst's densely populated books, hundreds of minor characters--clerks, chauffeurs, soldiers, whores--all whirl around his heroes in perfect focus for a page or two, then dot by dot, face by face, they vanish, leaving a heartbreaking sense of the vast Homeric epic that was World War II and the smallness of almost every life that was caught up in it."--The New York Times Book Review

"A book no reader will put down until the final page . . . Critics compare Alan] Furst to Graham Greene and John le Carr as] a master of historical espionage."--Library Journal (starred review) "Alan Furst's writing reminds me of a swim in perfect water on a perfect day, fluid and exquisite. One wants the feeling to go on forever, the book to never end. . . . Furst is one of the finest spy novelists working today."--Publishers Weekly

Forfattere
Bibliotekernes beskrivelse From a "New York Times"-bestselling author and the Omodern-day master of the genreO ("Newsday") comes a gripping novel of espionage and deception in 1938 prewar Paris. At the center of the intrigue is Hollywood star Frederic Stahl.