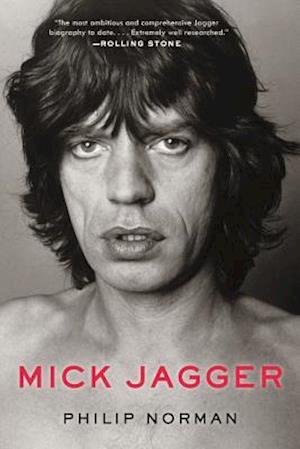 Author Phillip Norman, whose previous bestseller, John Lennon: The Life, was praised as a "haunting, mammoth, terrific piece of work" (New York Times Book Review) and whose classic Shout is widely considered to be the definitive biography of the Beatles, now turns his attention to the iconic front man of the Rolling Stones, "the greatest rock 'n' roll band in the world." Norman's Mick Jagger is an extraordinarily detailed and vibrantly written in-depth account of the life and half-century-long career of one of the most fascinating and complex superstars of rock music--the most comprehensive biography to date of the famously enigmatic musician. Keith Richards had his say in Life. Now it's time to get to know intimately the other half of the duo responsible for such enduring hits as "Paint It Black," "Sympathy for the Devil," "Gimme Shelter," and "(I Can't Get No) Satisfaction." Mick Jagger is a must read for Stones fans, and everyone who can't get enough of the serious memoirs and biographies of popular musicians, like Patti Smith's Just Kids, Does the Noise in My Head Bother You? by Steven Tyler, and the Warren Zevon story, I'll Sleep When I'm Dead.

Philip Norman towers above other biographers with his definitive studies of rock legends the world thought it knew, but who came to life as never before through the meticulousness of Norman's research, the sweep of his cultural knowledge, and the brilliance of his writing.

Now Norman turns to the most notorious yet enigmatic rock icon of them all. Throughout five decades of fronting the Rolling Stones, Mick Jagger has been seen as the ultimate arrogant superstar, whose sexual appetite rivals Casanova's and whose supposed reckless drug use touched off the most famous scandal in rock history.

But Norman reveals a Jagger far more complex than the cold archseducer of myth: human, vulnerable, often impressive, sometimes endearing. Here at last is the real story of how a shy economics student became a modern Antichrist...of Jagger's vicious show trial and imprisonment in 1967...of his unpublicized heroic role at the horrific Altamont festival...of the beautiful women from Chrissie Shrimpton to Jerry Hall, whom he has bedded but not always dominated...of the enduring but ever-fraught partnership with his "Glimmer Twin," Keith Richards.

While playful about some aspects of Sir Mick, Norman gives him long overdue credit as a songwriter and as a musician fit to rank among the great blues masters who inspired the Stones before money became their raison d'etre. Mick Jagger, above all, explores the keen and calculating intelligence that has kept the Stones on their plinth as "the world's greatest rock 'n' roll band" for half a century.