- Commonly Known by the Name of George Psalmanazar 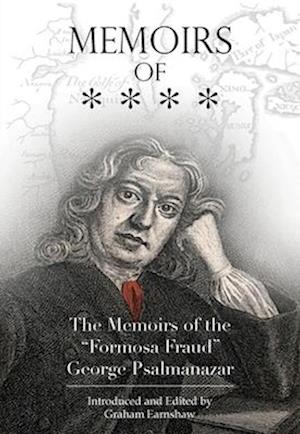 "The Formosa Fraud," known for most his life as George Psalmanazar, prepared his memoirs for publication after his death in 1764, but even then he did not directly admit the fraud, and never revealed what his real name was. The Memoirs of "* * * *"--that is, the memoirs of George Psalmanzar--are a crucial part of the story of the deception, and provide a highly entertaining account of his youth in France. His pretense of being a Formosan allowed him to escape rural poverty and live most of his life in the world's great city of the time--London.

This book is a companion to The Formosa Fraud, by Graham Earnshaw, which details the stupendous fraud perpetrated by Psalmanazar. He claimed he was born on the island of Formosa (Taiwan) and made up an entire fantasy for the island with a fake history, a fake language and long list of outrageous claims that became the book, A Description of Formosa, which was a publishing sensation in London in 1704. Even the Bishop of London swallowed Psalmanazar's story and invited him to teach his (fake) Formosan language at Oxford University. The Memoirs of "* * * *" provides the background to the story of one of the great frauds in literary history.