Masters of the Air 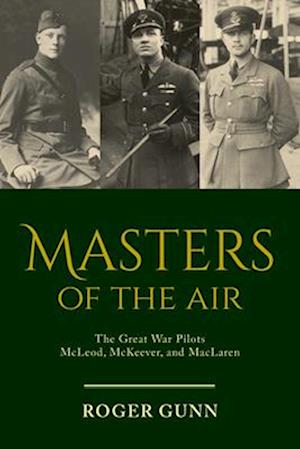 A fascinating look at three of the greatest Canadian pilots in the First World War.Alan McLeod, from Stonewall, Manitoba; Andrew McKeever, from Listowel, Ontario; and Donald MacLaren, originally from Calgary, Alberta, were daring and talented pilots. Although decidedly different from each other - in personality, in the planes they flew, and in their contributions to the war effort - they shared a strong sense of duty and a passion for flying, performing remarkable deeds in primitive planes, when aviation was in its infancy. One hundred years after they flew and fought for king and country, Masters of the Air brings these three men to life, detailing their development as pilots, battles in the air, and near-death experiences Like thousands of others, these three men answered the call to fight for the British Empire. And in the skies of Europe, they achieved greatness.

Forfattere
Bibliotekernes beskrivelse First World War pilots Alan McLeod, Andrew McKeever, and Donald MacLaren had incredible skills and ability in the air. Each was distinctively different from the other - in personality, in the planes they flew, and in their contribution to the war effort. notes; Bibliography; Index; 49 Illustrations, black and white