- The Elegies in the Marlowe Canon 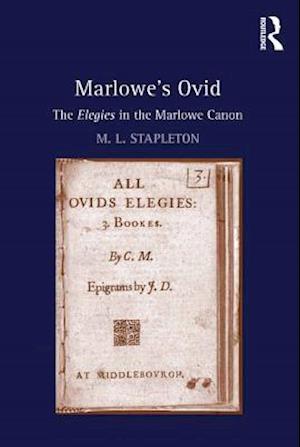 The first book of its kind, Marlowe's Ovid explores and analyzes in depth the relationship between the Elegies-Marlowe's translation of Ovid's Amores-and Marlowe's own dramatic and poetic works. Stapleton carefully considers Marlowe's Elegies in the context of his seven known dramatic works and his epyllion, Hero and Leander, and offers a different way to read Marlowe. Stapleton employs Marlowe's rendition of the Amores as a way to read his seven dramatic productions and his narrative poetry while engaging with previous scholarship devoted to the accuracy of the translation and to bibliographical issues. The author focuses on four main principles: the intertextual relationship of the Elegies to the rest of the author's canon; its reflection of the influence of Erasmian humanist pedagogy, imitatio and aemulatio; its status as the standard English Amores until the Glorious Revolution, part of the larger phenomenon of pan-European Renaissance Ovidianism; its participation in the genre of the sonnet sequence. He explores how translating the Amores into the Elegies profited Marlowe as a writer, a kind of literary archaeology that explains why he may have commenced such an undertaking. Marlowe's Ovid adds to the body of scholarly work in a number of subfields, including classical influences in English literature, translation, sexuality in literature, early modern poetry and drama, and Marlowe and his milieu.