- Gender and Sex in an African Society 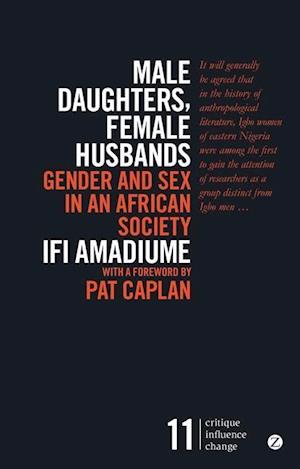 In 1987, more than a decade before the dawn of queer theory, Ifi Amadiume wrote Male Daughters, Female Husbands, to critical acclaim.This compelling and highly original book frees the subject position of 'husband' from its affiliation with men, and goes on to do the same for other masculine attributes, dislocating sex, gender and sexual orientation. Boldly arguing that the notion of gender, as constructed in Western feminist discourse, did not exist in Africa before the colonial imposition of a dichotomous understanding of sexual difference, Male Daughters, Female Husbands examines the structures in African society that enabled people to achieve power, showing that roles were not rigidly masculinized nor feminized.At a time when gender and queer theory are viewed by some as being stuck in an identity-politics rut, this outstanding study not only warns against the danger of projecting a very specific, Western notion of difference onto other cultures, but calls us to question the very concept of gender itself.