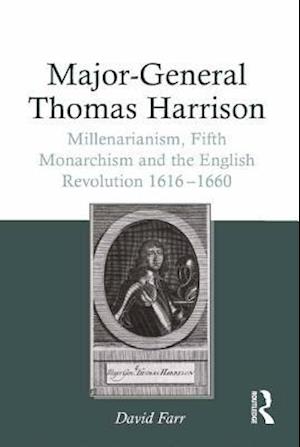 Thomas Harrison is today perhaps best remembered for the manner of his death. As a leading member of the republican regime and signatory to Charles I's death warrant, he was hanged, drawn and quartered by the Restoration government in 1660; a spectacle witnessed by Samuel Pepys who recorded him 'looking as cheerful as any man could do in that condition'. Beginning with this grisly event, this book employs a thematic, rather than chronological approach, to illustrate the role of millenarianism and providence in the English Revolution, religion within the new model army, literature, image and reputation, and Harrison's relationship with key individuals like Ireton and Cromwell as well as groups, most notably the Fifth Monarchists. Divided in three parts, the study starts with an analysis of Harrison's last year of life, the nature of his response to the political collapse of the Interregnum regimes, and his apparent acceptance of the Restoration without overt resistance. Part two considers Harrison's years of 'power', analysing his political activities and influence in the New Model, especially with regard to the regicide. The final part ties Harrison's political retreat to his initial emergence from obscurity; arguing that Harrison's relative political quietism during the later 1650s was a reflection of the development of his millenarianism. Unlike the only two previous full length studies of Harrison the present work makes use of a full range of manuscript, primary and secondary sources, including the huge range of new material that has fundamentally changed how the early modern period is now understood. Fully footnoted and referenced, this study provides the first modern academic study of Harrison, and through him illuminates the key themes of this contested period.