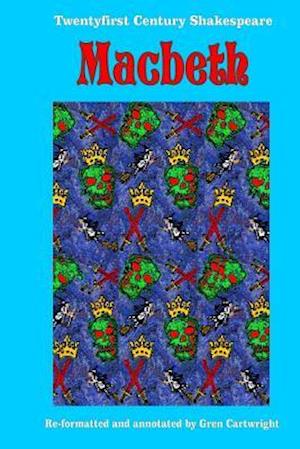 Twentyfirst Century Shakespeare is a new and exciting approach that opens up Shakespeare to a new generation of students. The text is the full traditional Shakespearean text presented in a more familiar, friendly, helpful format. If you are a student you will probably find reading Shakespeare easier than you thought possible. You will be able to read through scenes more quickly, more fluently and with greater understanding. The notes in the margins make things easier by shedding light on tricky words and phrases. You do still have to do some work but you will be surprised by how quickly you can become familiar with Shakespearean English. This is warm fuzzy Shakespeare designed to make your life a little easier. But don't take my word for it, open the book and take a look inside. If you are teaching Shakespeare you will hear your students read with more fluency and confidence, with greater expression and comprehension. This edition can save you so much time and energy. You can concentrate on developing your student's breadth and depth of knowledge and understanding. You can cover more ground and concentrate on what you feel is most important. You can help your students make a real connection with Shakespeare. Take a look inside and see how Twentyfirst Century Shakespeare can make life easier in your classroom. This book evolved from my experience in the classroom. The students I taught were used to reading other plays and came to Shakespeare with a genuine enthusiasm and a willingness to participate in a classroom reading. To be fair, they had no trouble reading the short exchanges but they did struggle when confronted with longer passages. At first I assumed that the problem lay in the language - unfamiliar vocabulary, archaic grammar and syntax and the sheer complexity of Shakespeare's verse. But many students also struggled with longer passages that weren't intrinsically difficult - just long. The solution came to me when I realised that they were reading to the rhythm of the blank verse, ignoring intonation, punctuation and meaning. I knew that actors often use the technique of marking their scripts at each punctuation mark. This helps them get the sense and structure of a speech. I wondered if this would also work in the classroom. So I reformatted the blank verse into lines based on meaning rather than iambic pentameters. I also paragraphed the longer speeches to give a more modern, less daunting look and feel. It worked. In fact it worked like magic. Since then I have added annotations to help with difficult words and phrases; stage directions that indicate who the speaker is speaking to and other features unique to these editions. But Shakespeare re-formatted is the essence of Twentyfirst Century Shakespeare. When I was a school boy, many years ago, only Grammar school pupils read Shakespeare in the UK. Even so, many of these brightest of pupils were turned off Shakespeare. Many of my generation found Shakespeare boring. Now we have an educational system in which all pupils, regardless of academic ability are expected to make some sort of sense of at least one Shakespeare play. The least we owe them is a text they can read. And who knows, they may even enjoy it. Many people find that removing the strait-jacket of blank verse makes the plays easier to read. They also find that it liberates the dramatic spirit of the plays and actually enhances the beauty, power and natural rhythms of Shakespeare's language. If blank verse is of primary importance to you, then this book may not be for you. But think about it, if we can give students a way in to Shakespeare, if they can get a grasp of what's going on, if they can tune in to the language and if they can breathe life and drama into their readings, they may well develop an enjoyment of and even a passion for Shakespeare. Twentyfirst Century Shakespeare is the way forward. Twentyfirst Century Shakespeare is Shakespeare for the twenty first century.