LOVE YOU LONG TIME NUKE-MAN: AND OTHER WRITINGS 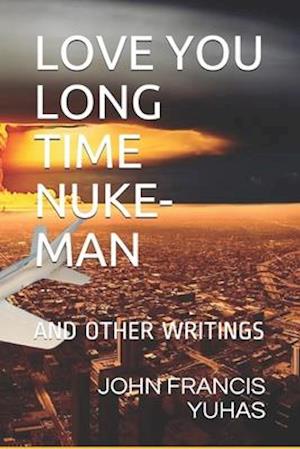 Two novellas, two proposals for non-fiction books, and one autobiographical work of poetry. All combined in one volume, each entry to possibly be expanded on in the future.

LOVE YOU LONG TIME NUKE-MAN: A young man just out of high school is accepted to both the Air Force Academy and to a College of Environmental Sciences. The real John Yuhas picked the College of Environmental Sciences. The alternate John Yuhas went to the Air Force Academy, became a pilot. And was selected to drop a nuclear weapon on Hanoi to end the Vietnam War!

DIGITAL TECHNOLOGIES & DEMOCRACY: Explores digital medias effect on Democracy, and is the effect good or bad.

TOUCH: Autobiographical poem about the brutally abusive childhood of the author, and many years later, after he married and had had the first of his three children, his running into the sadistic stepmother he'd endured in his youth.

NO PLACE LIKE HOME: Explores this thought - can you ever really go home again? Or is the desire to do so just an illusion and fantasy anyway?

THE O2 MAN: About a crazy old man who grows Christmas trees and makes oxygen. He decides to give away the Christmas trees but insists he should be paid for the oxygen he manufactures. He takes everyone in his town to court! Should I mention the O2 man loves to garden, also writes, and is a lot like the author?!