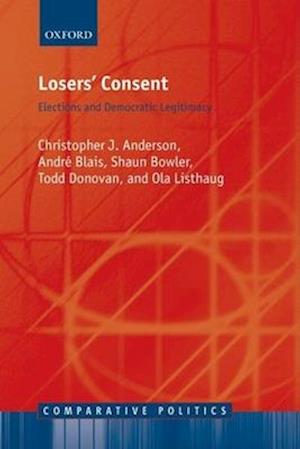 Democratic elections are designed to create unequal outcomes: for some to win, others have to lose. This book examines the consequences of this inequality for the legitimacy of democratic political institutions and systems. Using survey data collected in democracies around the globe, the authors argue that losing generates ambivalent attitudes towards political authorities. Because the efficacy and ultimately the survival of democratic regimes can be seriouslythreatened if the losers do not consent to their loss, the central themes of this book focus on losing: how losers respond to their loss and how institutions shape losing. While there tends to be a gap in support for the political system between winners and losers, it is not ubiquitous. The book paints apicture of losers' consent that portrays losers as political actors whose experience and whose incentives to accept defeat are shaped both by who they are as individuals as well as the political environment in which loss is given meaning. Given that the winner-loser gap in legitimacy is a persistent feature of democratic politics, the findings presented in this book contain crucial implications for our understanding of the functioning and stability of democracies. Comparative Politics is a series for students and teachers of political science that deals with contemporary government and politics. The General Editors are Professor Alfio Mastropaolo, University of Turin and Kenneth Newton, University of Southampton and Wissenschaftszentrum Berlin . The series is published in association with the European Consortium for Political Research.

Forfattere
Bibliotekernes beskrivelse Losers' Consent shows how being able to accept losing is one of the central requirements of democracy, and provides a major new contribution to our understanding of political legitimacy, comparative political behaviour, and democratic stability. numerous tables and figures