- Essays on the Bill of Rights and on Keats, Shakespeare and Dreiser 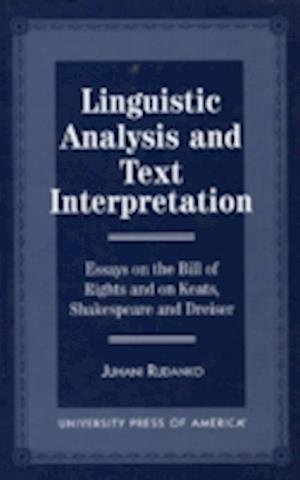 This book develops a range of new methods of textual analysis and applies them to the illumination of important texts, both documentary and fictional. The methods are linguistic or rhetorical in character and are selected depending on the properties of the texts investigated. The documentary text examined is the record of a key Bill of Rights debate in the United States House of Representatives. Attention is paid both to the substance and to the style of argumentation used by those arguing for amendments and by those arguing against their consideration. The literary texts come from John Keats, William Shakespeare and Theodore Dreiser. The methods in their case range from speech act and politeness theory to the study of case roles, and translations of Othello are considered in order to investigate the implications of case role analysis for interpreting a Shakespearean play and for understanding the nature of translation. Overall, it is argued that the methods developed provide fresh insights into the interpretation of each text investigated. From a methodological point of view, it is suggested that the application of analytical methods to concrete text, as in these case studies, leads to the further refinement of such methods, permitting their application to other texts in the future.