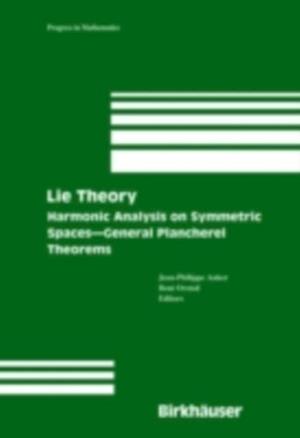 Semisimple Lie groups, and their algebraic analogues over fields other than the reals, are of fundamental importance in geometry, analysis, and mathematical physics. Three independent, self-contained volumes, under the general title Lie Theory, feature survey work and original results by well-established researchers in key areas of semisimple Lie theory.Harmonic Analysis on Symmetric Spaces-General Plancherel Theorems presents extensive surveys by E.P. van den Ban, H. Schlichtkrull, and P. Delorme of the spectacular progress over the past decade in deriving the Plancherel theorem on reductive symmetric spaces.Van den Ban's introductory chapter explains the basic setup of a reductive symmetric space along with a careful study of the structure theory, particularly for the ring of invariant differential operators for the relevant class of parabolic subgroups. Advanced topics for the formulation and understanding of the proof are covered, including Eisenstein integrals, regularity theorems, Maass-Selberg relations, and residue calculus for root systems. Schlichtkrull provides a cogent account of the basic ingredients in the harmonic analysis on a symmetric space through the explanation and definition of the Paley-Wiener theorem. Approaching the Plancherel theorem through an alternative viewpoint, the Schwartz space, Delorme bases his discussion and proof on asymptotic expansions of eigenfunctions and the theory of intertwining integrals.Well suited for both graduate students and researchers in semisimple Lie theory and neighboring fields, possibly even mathematical cosmology, Harmonic Analysis on Symmetric Spaces-General Plancherel Theorems provides a broad, clearly focused examination of semisimple Lie groups and their integral importance and applications to research in many branches of mathematics and physics. Knowledge of basic representation theory of Lie groups as well as familiarity with semisimple Lie groups, symmetric spaces, and parabolic subgroups is required.