Leaders from Marcos to Arroyo 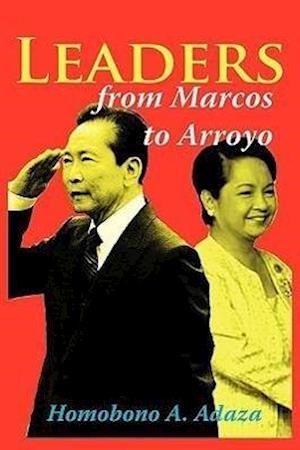 A very compelling account by former Governor Homobono A. Adaza of Misamis Oriental, one of the most outspoken critics of the national government, on his personal encounters with Philippine presidents and other leaders who could have been president. Adaza believes he has a better perspective of our country's leaders because he conversations with them during their unguarded moments when there were no cameras and their body language and verbal comments were not measured nor scripted. Adaza also writes in great detail about his involvements in all the major political events in the Philippines: from the election of President Ferdinand Marcos in 1965, the dark days of martial law, the end of the Mrcos dictatorship in 1986, the election of Corazon Aquino as president, the coup plots against her administration, the search for gold in the Philippine embassy grounds in Tokyo, Japan during the Ramos administration, the ouster of President Estrada in EDSA II and the recent "Garci tapes" scandal in the current Arroyo administration. As Filipinos prepare for the coming May 2010 presidential elections, Adaza passionately emphasizes the qualities of leadership the future president must possess and the programs to be pursued for the Philippines to become the "promised land" for millions of Filipinos. A must read for every Filipino who cares for his country, loves history and follows the world of Philippine politics.