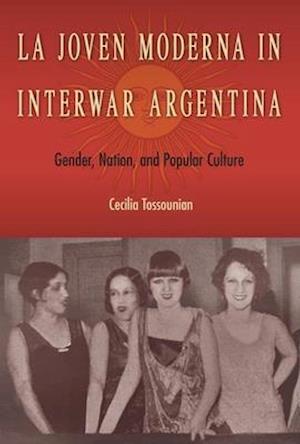 In this book, Cecilia Tossounian reconstructs different representations of modern femininity from 1920s and 1930s Argentina, a complex period in which the country saw prosperity and economic crisis, a growing cosmopolitan population, the emergence of consumer culture, and the development of nationalism. Tossounian analyzes how these popular images of la joven moderna--the modern girl--helped shape Argentina's emerging national identity. Tossounian looks at visual and written portrayals of young womanhood in magazines, newspapers, pulp fiction, advertisements, music, films, and other media. She identifies and discusses four new types of young urban women: the flapper, the worker, the sportswoman, and the beauty contestant. She shows that these diverse figures, defined by social class, highlight the tensions between gender, nation, and modernity in interwar Argentina. Arguing that images of modern young women symbolized fears of the country's moral decadence as well as hopes of national progress and civilization, La Joven Moderna in Interwar Argentina reveals that women were at the center of a public debate about modernity and its consequences. This book highlights the important but underappreciated role of gendered figures and popular culture in the ways Argentine citizens imagined themselves and their country during a formative period of cultural and social renewal.