'Kubla Khan' and the Fall of Jerusalem 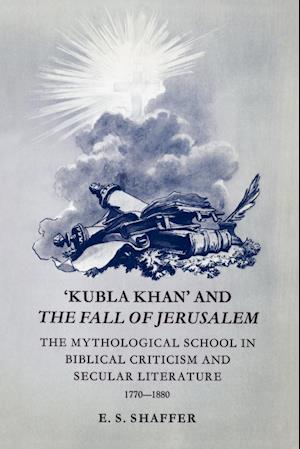 Dr Schaffer outlines the development of the mythological school of European Biblical criticism, especially its German origins and its reception in England, and studies the influence of this movement in the work of specific writers: Coleridge Hoelderlin, Browning, and George Eliot. The 'higher criticism' treated sacred scripture as literature and as history, as the product of its time, and the highest expression of a developing group consciousness; it challenged current views on the authorship and dating of the Pentateuch and the Gospels, on inspiration, prophecy, and canonicity, and formulated a new apologetics closely linked with the growth of Romantic aesthetics. The importance of this study is that it shows that readings of specific literary texts can intersect with general movements of thought and action through the scrutiny of a clearly defined intellectual discipline, here the higher criticism, which developed as a particular expression of the larger trends in the history of the period. Dr Shaffer throws light on individual works of literature, the formation between England and Germany, and the bases of European Romanticism.