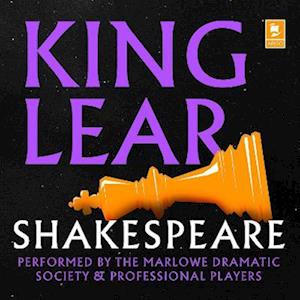 William Collins Books and Decca Records are proud to present ARGO Classics, a historic catalogue of classic prose and verse read by some of the world's most renowned voices. Originally released as vinyl records, these expertly remastered stories are now available to download for the first time.'When we are born, we cry that we are come to this great stage of fools.'Depicting a once-great ruler's descent into madness, King Lear is one of the most powerful tragedies ever staged.King Lear divides his kingdom among the two daughters who flatter him and banishes the third one who loves him. His eldest daughters both then reject him at their homes, so Lear goes mad and wanders through a storm. His banished daughter returns with an army, but they lose the battle and Lear, all his daughters and more, die.All of the Shakespeare plays within the ARGO Classics catalogue are performed by the Marlowe Dramatic Society and Professional Players. The Marlowe was founded in 1907 with a mission to focus on effective delivery of verse, respect the integrity of texts, and rescue neglected plays by Shakespeare's contemporaries and the less performed plays of Shakespeare himself. The Marlowe has performed annually at Cambridge Arts Theatre since its opening in 1936 and continues to produce some of the finest actors of their generations.Thurston Dart, Professor of Music at London University and a Fellow of Jesus College Cambridge, directed the music for this production.The full cast includes: William Devlin; Ian Lang; John Tracy-Phillips; Patrick Creean; Gary Watson; William Squire; Donald Beves; Frank Duncan; Peter Orr; Michael Burrell; Peter Foster; Terrence Hardiman; Roger Hammond; Michael Bakewell; Jill Balcon; Prunella Scales; Margaret Rawlings.