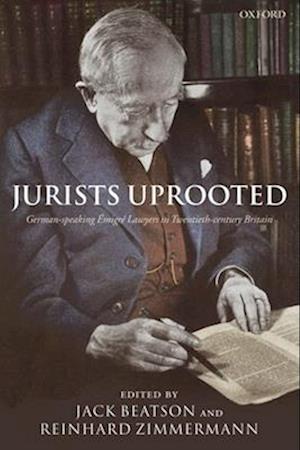 Recent years have seen a growing body of literature on the contribution of scientists, historians, and literary and artistic figures who were forced to leave Germany and Austria after Hitler came to power. This volume is the first study of the important contribution of refugee and emigre legal scholars to the development of English law. Those considered in the book are: E. J. Cohn, David Daube, Rudolf Graupner, Max Grunhut, Hermann Kantorowicz, OttoKahn-Freund, Hersch Lauterpacht, Gerhard Leibholz, Kurt Lipstein, F. A. Mann, Hermann Mannheim, Lassa Oppenheim, Otto Prausnitz, Fritz Pringsheim, Gustav Radbruch, Clive Schmitthoff, Fritz Schulz, Georg Schwarzenberger, Walter Ullmann, Martin Wolff, and Wolfgang Friedmann.The scene is set by two introductory chapters which explore the general background to the exodus of the emigre scholars from Germany and to their arrival in the United Kingdom. The volume then moves on to analyse the scholars' backgrounds, histories, and intellectual bent as individuals, and evaluates their work and its impact on legal scholarship in both England and Germany. In those subjects where the influence of these scholars was particularly strong: public and privateinternational law, Roman law, and comparative law; it considers how far, collectively, these German and Austrian educated refugees and emigres shaped the development of the law. There are also a number of personal memoirs, including one by the surviving member of the group, Kurt Lipstein.These lawyers had received their first legal training in a civilian legal system, but in the UK they were faced by the less schematic, more pragmatic, common law. The differences between these legal traditions made it more difficult for them to adjust and to find suitable professional positions than was the case for refugee scientists, for example. However the differences gave them a unique perspective which is of particular interest today, when the relationships between the common law and thecivilian legal systems of Europe are of growing theoretical and practical imporance.

Forfattere
Bibliotekernes beskrivelse Presents a study of the contribution of refugee and emigre legal scholars to the development of English law. This book considers nineteen legal scholars trained in Germany or Austria and who made their home in England, and assesses their contribution to scholarship in a different legal system from that which they left.