- The Critical Responses to the Rabbit Saga

indgår i serie CRITICAL RESPONSES IN ARTS AND LETTERS 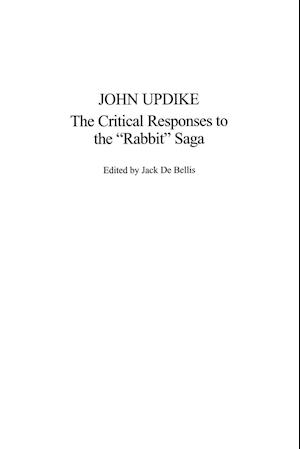 Twenty-seven critics, as well as Updike himself, provide a kaleidoscopic view of the Rabbit Angstrom saga in 34 reviews and essays. There is dual purpose of this collection of critical responses: first, to provide a historical view of the critical reception of all of Updike's works about Harry Rabbit Angstrom-the four Rabbit novels and the novella Rabbit Remembered and second, to show how these reviews and articles can illuminate the reader with the range of approaches to the saga. These responses to the saga reveal the reception of each installment of the saga and how critical acclamation rose with each work.The first reviews of Rabbit, Run noted Updike's ability to redeem an ex-basketball player's ordinary life through brilliant, innovative style. Scholarly essays debated whether Rabbit was a satiric figure. Updike's sequel, Rabbit Redux, showed how, for reviewer Richard Locke the inner surface of banal experiences could be blended seamlessly to social unrest and war. A later critic, Irina Negrea adopted the Jean Baudrillard to critique Marshall McLuhan's optimistic vision of the global village. Reviewer Thomas R. Edwards found that Rabbit Is Rich is composed of meditations on religion, politics, and economics, with motifs intertwined. The saga, for critic Ralph Wood showed Updike as our finest literary celebrant both of human ambiguity and the human acceptance of it. Reviewing Rabbit at Rest, Joyce Carol Oates called it a hugely ambitious achievement and critic Thomas Disch proclaimed, it to be the best large-scale literary work by an American in this century, thus the Great American Novel.

Forfattere
Bibliotekernes beskrivelse Twenty-seven critics, as well as Updike himself, provide a kaleidoscopic view of the Rabbit Angstrom saga in 34 reviews and essays. 1 Hardback