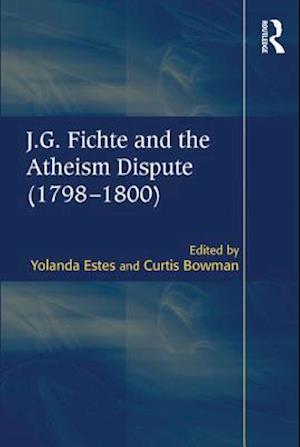 The atheism dispute is one of the most important philosophical controversies of late eighteenth and early nineteenth century Germany. Johann Gottlieb Fichte, one of the leading philosophers of the period, was accused of atheism after publishing his essay 'On the Ground of Our Belief in a Divine World-Governance', which he had written in response to Karl Friedrich Forberg's essay 'Development of the Concept of Religion'. Fichte argued that recognition of the moral law includes affirmation of a 'moral world order', which he identified with God. Critics charged both Forberg and Fichte with atheism, thereby prompting Fichte to launch a public campaign of defense that included his threat to resign his position at the University of Jena if he were subjected to any government reprimand. Fichte was forced to make good this threat when his work was censured. The dispute eventually died down but it influenced many other thinkers for years to come. J. G. Fichte: The Atheism Dispute (1798-1800) is the first English commentary devoted solely to the atheism dispute as well as the first English translation of collected writings from the Atheism Dispute. This book brings together many major essays and documents relating to this dispute. These include the anonymous polemic 'A Father's Letter to his Student Son about Fichte's and Forberg's Atheism', Fichte's essays 'Appeal to the Public' and 'Juridical Defense', and numerous documents from the University of Jena and the ducal courts of Dresden, Weimar, and Gotha. Most of the texts are translated from German into English for the first time, and all are accompanied by full commentaries and detailed notes. Bowman and Estes bring to an English speaking audience the full details of this controversy, which ended Fichte's career in Jena and profoundly influenced his approach to communicating philosophical and religious concepts.