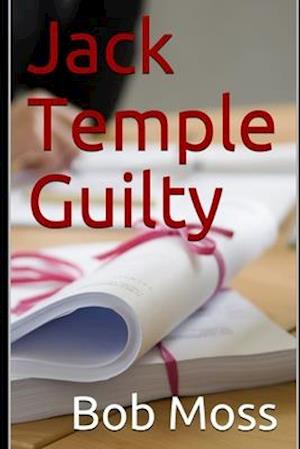 "Jack Temple Guilty" is a legal office drama set in Barcourt Chambers located in the Temple London and tells the story of the daily battles faced by their senior clerk Jack Temple to keep his job and chambers afloat. A barrister's clerk is defined in the book as "a cross between a theatrical agent, a nanny and a pimp". Judge for yourself.Set between 1995 and 2005 the story highlights the early male domination of chambers that is gradually undermined as female influences become increasingly evident. Jack Temple has to deal with this changing environment as well as whatever counsel and their professional clients throw at him. This includes allegations of drug abuse that threaten a barrister's career and the very existence of Jack's chambers, all spiced up by jealous rivalry and external challenges to his position as senior clerk. For Jack Temple life in the fast lane is both stressful and exhilarating, and he thrives on it all. "Jack Temple Guilty" is the middle book in the Jack Temple Trilogy. The first volume "Jack the lad" covers Jack's early years as a bachelor and barrister's clerk learning his trade. The final volume "Jack Temple Not Guilty" takes Jack through a period of dramatic change leading up to the present day.The trilogy is the product of the author's unique experiences both as a solicitor for 15 years then as a senior clerk / practice manager of chambers in London and Liverpool for 14 years.The books are for those who enjoy a good legal drama and include fans of the TV legal drama series such as "Silk" and "North Square", as well as the box set "Suits", not forgetting the exploits of Rumpole Former barrister and writer Peter Moffat has been quoted as saying he believes the legal world is such a fertile ground for drama because everybody's under pressure. This is certainly true of life for the clerks in Barcourt chambers, especially senior clerk Jack Temple."A fascinating insight into the politics and power-games of a barristers' chambers and their all-powerful senior clerk." Tim Kevan, author of "Law and Disorder" and "Law and Peace"] "I enjoyed the read. Good holiday stuff. I recommend it." David Goddard Senior Clerk at 4 Stone Buildings and President of the Institute of Barristers' Clerks "I enjoyed the book which is an interesting insight into our work and how the female clerk has developed. I think readers will enjoy it." Jackie Ginty Deputy Senior Clerk at One Essex Court.