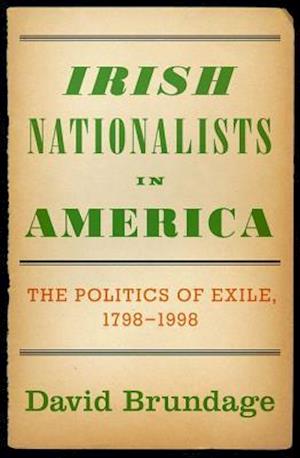 In this important work of deep learning and insight, David Brundage gives us the first full-scale history of Irish nationalists in the United States. Beginning with the brief exile of Theobald Wolfe Tone, founder of Irish republican nationalism, in Philadelphia on the eve of the bloody 1798 Irish rebellion, and concluding with the role of Bill Clinton's White House in the historic 1998 Good Friday Agreement in Northern Ireland, Brundage tells a story of more twohundred years of Irish American (and American) activism in the cause of Ireland. The book, though, is far more than a narrative history of the movement. Brundage also effectively weaves into his account a number of the analytical themes and perspectives that have transformed the study of nationalism over the last two decades. The most important of these perspectives is the "imagined" or "invented" character of nationalism. A second theme is the relationship of nationalism to the waves of global migration from the early nineteenth century to the present and, more precisely,the relationship of nationalist politics to the phenomenon of political exile. Finally, the work is concerned with Irish American nationalists' larger social and political vision, which sometimes expanded to embrace causes such as the abolition of slavery, women's rights, or freedom for Britishcolonial subjects in India and Africa, and at other times narrowed, avoiding or rejecting such "extraneous concerns and connections. All of these themes are placed within a thoroughly transnational framework that is one of the book's most important contributions.Irish nationalism in America emerges from these pages as a movement of great resonance and power. This is a work that will transform our understanding of the experience of one of America's largest immigrant groups and of the phenomenon of diasporic or "long-distance" nationalism more generally.

Forfattere
Bibliotekernes beskrivelse In this important and insightful work, David Brundage tells a dramatic story of more two hundred years of American activism in the cause of Ireland, from the 1798 Irish rebellion to the 1998 Good Friday Agreement. 15 illus.