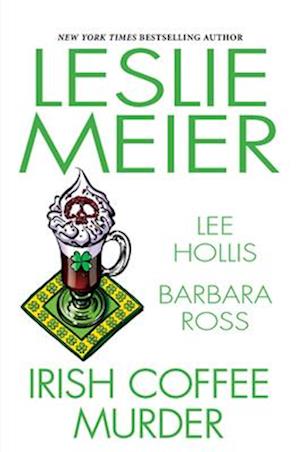 You don't need to be Irish to enjoy St. Patrick's Day in Maine, where the chilly March weather offers the perfect excuse to curl up with an Irish coffee...But in these St. Patty's-themed novellas by fan-favorite cozy mystery authors Leslie Meier, Lee Hollis, and Barbara Ross, someone may have spiked this year's brew with murder! IRISH COFFEE MURDER by LESLIE MEIERPart-time reporter Lucy Stone is writing a piece for the Courier about four Irish step dancing students from Tinker's Cove on the cusp of making it big. But the story becomes headline news for all the wrong reasons when one girl's mother is found dead in her bathtub. Did a stage mom take rivalry too far, or is some other motive at play? DEATH OF AN IRISH COFFEE DRINKER by LEE HOLLISAs owner of Bar Harbor's hottest new restaurant, Hayley Powell offers to cater the after-party for popular comedian Jefferson O'Keefe, who's playing his old hometown for St. Patrick's Day. But it's no laughing matter when Jefferson keels over after gulping down his post-show Irish coffee, leaving Hayley to figure out who decided this joker had gone too far . . . PERKED UP by BARBARA ROSSIt's a snowy St. Patrick's Day in Busman's Harbor. But when the power goes out, what better way for Julia Snowden to spend the evening than sharing local ghost stories--and Irish coffees--with friends and family? By the time the lights come back, they might even have solved the coldest case in town . . .