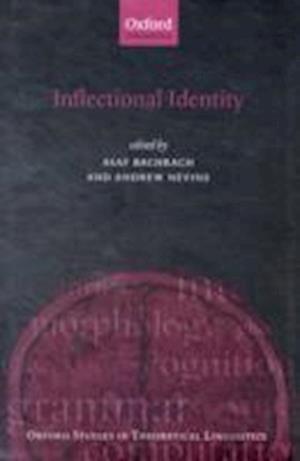 A recurrent issue in linguistic theory and psychology concerns the cognitive status of memorized lists and their internal structure. In morphological theory, the collections of inflected forms of a given noun, verb, or adjective into inflectional paradigms are thought to constitute one such type of list. This book focuses on the question of which elements in a paradigm can stand in a relation of partial or total phonological identity. Leading scholars considerinflectional identity from a variety of theoretical perspectives, with an emphasis on both case studies and predictive theories of where syncretism and other "paradigmatic pressures" will occur in natural language. The authors consider phenomena such as allomorphy and syncretism while exploring questionsof underlying representations, the formal properties of markedness, and the featural representation of conjugation and declension classes. They do so from the perspective of contemporary theories of morphology and phonology, including Distributed Morphology and Optimality Theory, and in the context of a wide range of languages, among them Amharic, Greek, Romanian, Russian, Saami, and Yiddish. The subjects addressed in the book include the role of featural decomposition of morphosyntacticfeatures, the status of paradigms as the unit of syncretism, asymmetric effects in identity-dependence, and the selection of a base-of-derivation. The Bases of Inflectional Identity will interest linguists and cognitive scientists, especially students and scholars of phonological theory and the phonology-morphology and mind-language interfaces at graduate level and above.

Forfattere
Bibliotekernes beskrivelse This book throws new light on the syntax, morphology, and phonology interfaces by focussing on the key current question of which elements in a paradigm can stand in a relation of partial or total phonological identity.